State lawmakers spent a portion of Tuesday morning discussing the finer points of a “sport” known as chicken boxing. And no, it wasn’t an April Fools’ joke.

The bill is meant to tighten the language in the state’s 2008 cockfighting ban.

The legislation would expand the state’s ban on cockfighting to include all types of chickens. It also would make it a felony to possess paraphernalia, such as razors, spurs, leather spur covers and other items commonly used in the sport that once was prevalent in south Louisiana but is now illegal.

Senators had few questions, except for state Sen. Elbert Guillory, R-Opelousas, who said the legislation would shut down the sport of “chicken boxing,” a nonfatal form of cockfighting in which the birds aren’t outfitted with razors and spurs.

Guillory said he was especially concerned about the part of the law that deals with paraphernalia. 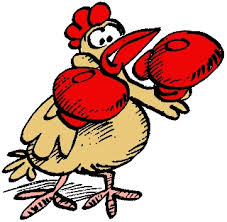